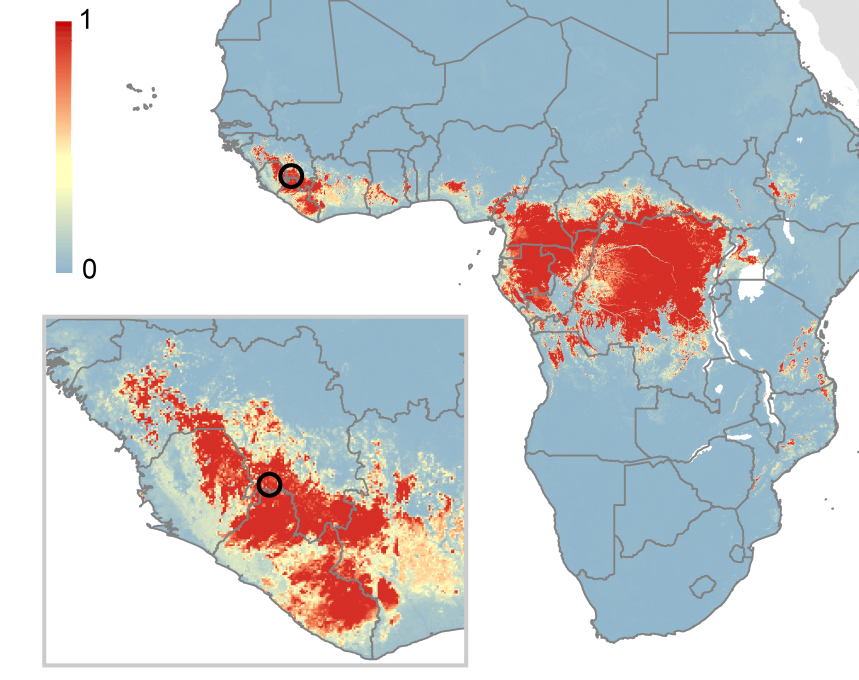 ollowing the worst Ebola virus disease outbreak in history, researchers from the University of Oxford have mapped the risk of Ebola virus zoonitic transmissions (from animal vectors to humans) across the African continent (original article here). The authors model data from the current epidemic (as well as previous ones: 1976-2002) as a response to the following predictors: elevation (SRTM), vegetation (MODIS EVI), land surface temperature (MODIS LST), potential evapotranspiration and species distribution data of bat vectors. The resulting models were then used to predict the habitat suitability of Ebola virus vectors across Africa in affected and “at-risk” countries.

Approximately, 22M people live within the predicted Ebola virus niche. Intuitively, the bigger the confluence of this niche with human populations, the higher the risk of zoonitic transmissions. The suitability of the part of this niche that overlaps with human populations (expressed as the probability of an EVD vector (mostly fruit bats) occurring at a given location) is then used to estimate the populations at risk of Ebola outbreaks for each country. Most importantly, the suitability of the predicted niche (across space) reflects the relative probability of zoonitic transmissions (see inset image).